A rebuilt restaurant on Orient Beach

Mike and I are in St. Maarten/St. Martin this week, one year after Hurricane Irma devastated the island. We were here when Hurricane Irma came through and wanted to come back and see the island while it is recovering. I also wanted to finish the last section of the book on the hurricane experience and lessons learned and seeing the island at this stage is a part of that.

September 5, 2017, was the night we will always remember. We went to bed early, knowing that Irma would greet us before morning. The “we” included our local friends who moved in with us to brave the storm. Our friends, Ron and his wife, Muskaan, and their two sons, eleven-year-old Sameer and seventeen-month-old Veer, and Mike and I huddled together in our bathroom while Irma passed over.

Thankfully, once Irma was gone we were all fine although much of the island wasn’t. Once the storm was over, we spent the next few days trying to stay safe while evacuation plans were underway to get the tourists off of the island as soon as possible. Mike and I were fortunate. We were evacuated by Royal Caribbean’s Adventure of the Seas four days after the hurricane. Ron and his family left our unit when we did and moved in with local friends for a few days since their home was uninhabitable.

Harry and Ron of Joe’s Jewelry in St. Maarten, still # 1 on Trip Advisor!

September 5, 2018, Ron and his family had Mike and me over for dinner, and we went down memory lane about our shared experience. Mike and I learned that Ron and his family were also evacuated from the island by Royal Caribbean a few days after we were. They were taken to Puerto Rico, where Hurricane Maria was due to land the next day! Through ingenuity and hard work, Ron was able to get his family on a flight to New York, just missing Maria. From there they went home to India until things improved in St. Maarten. Ron returned to St. Maarten in November and his family in December.

And what about the island? How is it doing? 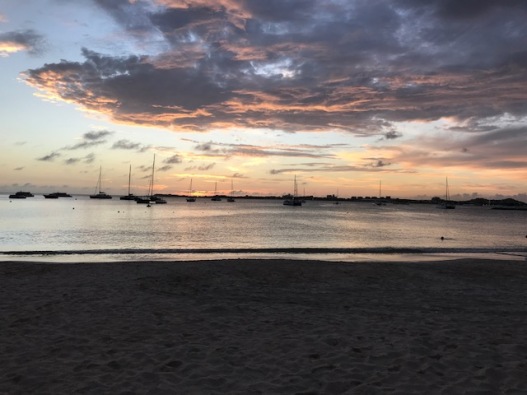 Just one of the many beautiful sunsets

The beaches are as beautiful as ever. The people are as friendly as they always were. There are plenty of restaurants that are open, although some are still in the rebuilding stage. Some areas of the island are in good shape; others are not. There are many signs of Irma’s wrath all around. There has been some rebuilding, and more in process. There is more needed. Common themes we heard was that there are not enough workers and not enough money for all that needs to be done.

But the locals are not complaining. They are grateful that the tourists are returning. The cruise ships are much of the livelihood, and they started coming back to the island in December. People are spending money, and that is what is needed. The economy of the island depends on tourism, and there are healthy signs that tourism is starting to rebound.

While Hurricane Irma did major damage to the island, it did not destroy it. This special island and its people are rising again.