Those of you who know me, either in person or through my writings, know how important traditions are to me.  One of my favorite traditions isn’t even mine, although I get to celebrate it each year.  This tradition belongs to my husband, Mike.

Mike and I met in 1983 in Wilson, NC.  We both were there due to our jobs.  I was in hospital administration at the time and had been recruited to Wilson in 1981 by Wilson Memorial Hospital.  Mike was with Blue Bell and had been transferred there in 1982.  We both had a daughter from our first marriages who were there with us.  We met in May of 1983 through the gracious effort of a mutual friend, and I believe, the grace of God.  We married less than a year later, in April of 1984.  In April of 2018, we will celebrate our 34th year of marriage.  Our marriage is (almost!) a daily blessing.  You understand the “almost” part, I am sure!  None of us are saints! 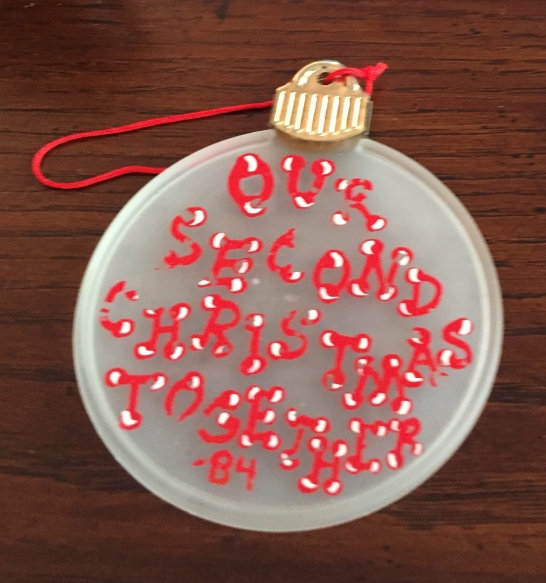 As our family has evolved over the years, Mike’s tradition has as well.  A few years after “Our First Christmas Together” Mike decided to expand the tradition and has personalized the ornaments with the names of all who will sleep over and be with us on Christmas morning.  Most of the years we have been in Raleigh for Christmas, but not all.  In 2003, we travelled to Douglasville, GA for Christmas, where daughter Tara and son-in-law Stephen lived, and Mike began to put the location on the ornament.  Once the grandchildren came, we have travelled to them the years their parents wanted to be home for Christmas.  Those years, the ornament has the names of all who will be together and the location.  One year, 2010, although we were in Raleigh for Christmas, we were living in a different location because our home was being repaired due to water damage.  Our Christmas ornament from that year is marked “Bay Meadow Court 2010.”

Mike’s Christmas ornament tradition is recorded history of our family’s life.  Recently, we were trying to remember what year we lived at Bay Meadow Court and quickly found the answer in the ornaments.  If we need to remember something about our family from a particular year, our ornament from that year is the record.  Examples include the years that our chosen daughter Paula was home with us at Christmas, and when her husband Bryan joined us.  Son-in-laws Stephen and Johnathan joined our family and our ornaments in 2002 and 2007, respectively, the Christmases of the years they married daughters Tara and Chatham.  The year that Dad and Rosie were with us for Christmas was 2006.  Uncle Barry has joined us for Christmas since 2014.  MoMo, (who I introduce sometimes as my oldest daughter and at other times as my younger sister!) has been in the family on the ornament since 2000.  She has not had her own bed at Christmas because the granddaughters insist that she sleep with them, and she does.  This year she was elevated by them, even more, when they insisted that she sit with them at the children’s table for all meals! 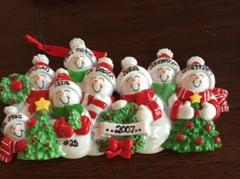 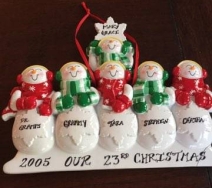 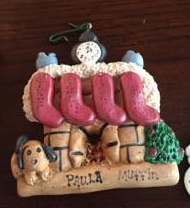 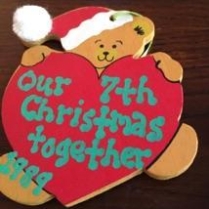 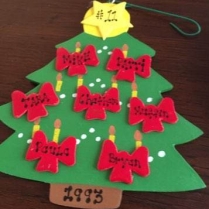 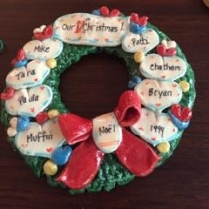 Granddaughter Elsie was looking at the ornaments on the counter and noticed a name on an ornament that she did not recognize, Dotti.  Dotti is my mother who died in 1998, who Elsie, born in 2007, never knew.  Elsie asked how old my mother was when she died, and I answered, “64.”  Elsie replied in a loud voice, “Nana, you are 66!”  I felt her concern.  We then had a brief conversation about age and health and my mother.  The Christmas ornament taught me a lesson.  I had not made sure that our granddaughters knew their maternal great-grandmother through stories, even though it was not possible for them to know her in person.

As our family has grown in number, it has become harder to get all of the information to fit on the ornaments.  Last year and again this year we had this problem.  Once again, the innovator Mike came up with a solution to that problem.  He bought two of the same ornaments and had the names written on both sides, then glued the two ornaments together. 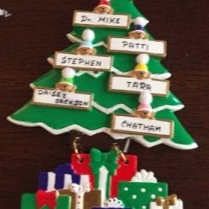 Christmas traditions, ornaments, and memories.  When we look at our family’s Christmas ornaments, we go down memory lane.  In 1983 when Mike and I were engaged and about to marry and combine our families, our ornament of that year recorded our history.  In 2017, our ornament is the recorded history of our expanded family, our two daughters and their families, including our three granddaughters, Mary Grace (12,) Elsie (10,) and Virginia (5.)  Our 2017 ornament also includes a new family member, our soon to be born grandson Drew, due February 20, 2018.  What blessings! 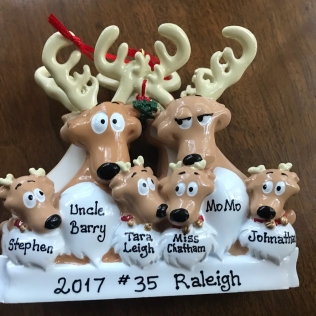