How to Make Sense of it All?

Two popular celebrities, Kate Spade and Anthony Bourdain, commit suicide three days apart, both suicides apparently coming as a surprise to many people. As more time passes, there will likely be some people close to both who knew of their mental condition, their despondency, or whatever range of emotions they were experiencing. Whether there was any indication of the possibility of suicide will be a harder question that may never be answered. Regardless of any of this, it is so very tragic when someone gets to the point of no return and decides that they can no longer bear whatever demons possess them.

While writing this I am at our family vacation at Hilton Head Island with our family, including our three granddaughters and one grandson.  Our granddaughters are 13, 11, and soon to be 6, and our grandson is 3 months old. I can’t help but think of Kate Spade’s 13-year-old daughter and grieve.  Elsie, our 11-year-old granddaughter, is very curious about Kate Spade’s death and her 13-year-old daughter, asking lots of questions.  We do our best to answer her questions honestly, not giving more information than her young heart needs. And I grieve that a 13-year-old has to even know about this, much less experience it, as Kate Spade’s daughter obviously must. Suicide is tragic for all involved.

As a child and as an adult I worried about the possibility/probability of my mother committing suicide. She never did, thankfully. She died at the early age of 64 from respiratory and cardiac problems. I also had another close family member who I helped to pull back from the brink of suicide. Thankfully, he chose to live and went into mental health treatment and conquered his demons. So, I know suicide up close and personal. 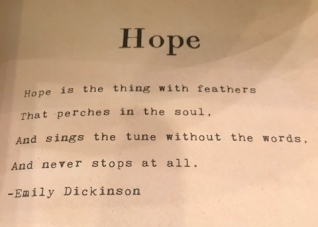 I remember reading of one of the principals involved in the Enron crime years ago who committed suicide. Someone referring to that death stated that he “no longer had hope.” I have come to believe that lack of or loss of hope is the common denominator in suicides. Regardless of any other variables, when one submerges the strong desire for self-preservation and takes his or her own life, hope is missing. 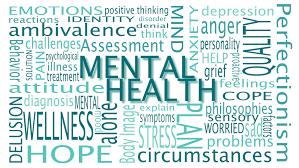 Health and happiness are also missing. Regarding health, it is often or perhaps even usually mental health that is involved. I think it is safe to say that one who is mentally healthy does not commit suicide. I won’t go so far as to say that one who commits suicide is mentally ill; I don’t know about that. The signs of the mental health issues can be well hidden, not known, or ignored.

Happiness involves being content with one’s circumstances., whatever they are. Happiness usually involves having close family relationships and other relationships. Happiness may also involve pleasure, but pleasure is not a requirement of happiness.  And while a certain amount of financial resources is usually needed to be content and happy, those financial resources are only what is required to do what is important to the individual, and not about wealth. Wealth does not make one happy. The suicides of Kate Spade and Anthony Bourdain seem to be examples of that.

Of these three, health, happiness, and hope, hope is the one that is harder to gauge and harder to describe. What are the signs of hope? How does one act who has hope? The answer to these questions is complex.  Can one be despondent and depressed and have hope? I think so. If so, what are the behaviors that are exhibited by those who still have hope?

One who has hope continues to put one foot in front of the other, doing all that he can to press on, even when circumstances are grim. She doesn’t avoid or ignore her problems, thinking they will go away, but instead continues to do all that she can to improve her circumstances. He does not retreat, either from the problems or from people. 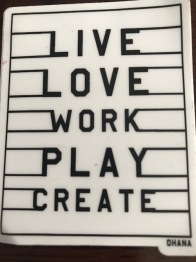 People who have lost hope do retreat and do so in various ways, although it may not be obvious to others.  Until it is too late.

2 Responses to How to Make Sense of it All?