An Angel in My Midst

I went into a laboratory to have blood drawn, never expecting to receive a blessing. I left crying, not from the blood stick, but from the blessing I received from the technician, Tina.

From the time I entered the office, I was aware that the person behind the counter was a positive person. She greeted me cheerfully and asked me to sign in electronically. I was impressed with the electronic sign-in and told her so when it was my turn to speak with her. It was easy and quick to use, and I am not always (or even often!) proficient with electronics. She replied that the machine is a struggle for some people, and I could understand that. I have become more comfortable with self-service machines, such as those in grocery stores; when they work, that is. And this machine worked well. When I learned that the technician behind the desk also drew the blood, that she, in fact, was the only staff person in the office, so she did everything, I understood why there was a self-service sign-in procedure.

Grandson Drew caught at one of his happiest times; pulling out the cookbooks in the kitchen!

When I was taken back by Tina for my blood to be drawn, I asked her if she was good at drawing blood, to which she replied, “You will be the judge of that,” which is absolutely true. Tina was an expert at drawing blood. I soon found that she was also an expert about life.

We began to talk, although I do not recall how the conversation about her life began. But I am so glad that she shared her story with me. I was inspired by her witness, and I do not think she was trying to inspire me or even impress me; she was sharing from her heart.

Tina shared with me that she lost 7 family members in 7 years, including her only son, who was 19 years old when he died. He was driving in a car behind her when he was killed by someone in another vehicle. When she told me the story of him, she focused on the blessings she had with him before he died, not his death. She spoke of the fact that he had come home for Christmas from Colorado where he was in school, and that they had a wonderful visit. She spoke of the fact that him going to Colorado for school, him being away from her for the first time, prepared her for him being away from her permanently. She stated that she chose to focus on the fact that she had him for 19 years, not that she lost him. Wow! As a parent who has the same bargain with God many mothers have, “Please let me go before my children and grandchildren,” I had a glimpse of heaven when Tina said that.

Happy times are often found in the simple things!

She spoke of her sister who was an addict and her parents who were both addicts, one to prescription drugs and the other to alcohol, and that they were 3 of the 7 family members she lost in 7 years. There was no bitterness when she spoke of their addictions, only compassion. She said that due to all of the addictions she had seen, that she does not drink alcohol or take any drugs, not even for a headache. She spoke of the fact that she had been encouraged to take pills by more than one physician while going through the trauma she suffered, but she chose not to. She said she had seen too many people get addicted to drugs just that way, and she wasn’t going to take that chance. She was not bragging about this, just sharing. 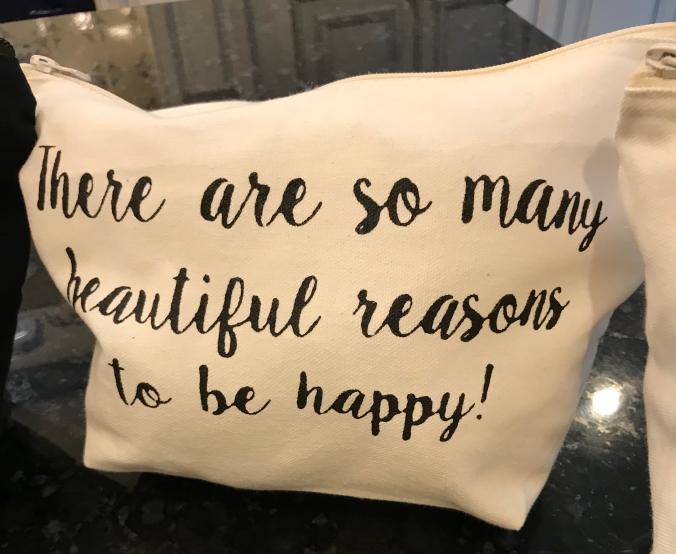 I told Tina that I shared her thoughts about the overuse of prescription drugs, that I had even written about it from a health perspective in my first book that was published in 2002. I believe that this problem is much greater now than it was then, as evidenced by the alarming Opioid addiction in our country. But Opioids are not the only problem. The use of antidepressants for long periods of time for normal “coping” problems, and without therapy accompanying the medicine, is a serious health issue. This should not be read as I am saying that there is no need for antidepressants. They do have their place, and if one suffers from clinical depression, they are absolutely needed. But antidepressants should not be overused, and health care practitioners should monitor their usage with the goal being for the person to come off of those in a reasonable period of time, and counseling should be ordered as an adjunct treatment. But back to Tina, and her message from her life experiences.

“It is all a part of the plan,” she said, and “I have had so many blessings.” And what to me was her greatest message of all, “I choose to be happy.” Tina said that she believes that every day she has a choice, to be happy or not and that she chooses to be happy.

You and I also have a choice we make every day to be happy, or not. We may not think of that often enough; we may not even be aware that we are making that choice, but we are. Some days our “happy” is joyful, full of light and love. Some other days our “happy” is just getting through the day. On those days when we do not feel happy, we can still choose happiness. We can even “fake it until we make it,” which does not mean being inauthentic, but “putting on a happy face,” being a blessing to others who may need our positivity even when we do not have much to give. And in so doing, choosing happiness during the hard times often results in the sadness or other negative emotions we were feeling lifting.

Thank you, Tina, for shining your light so bright, and for being an angel in my midst. You have inspired me to choose happiness.