Delta is Ready When You Are! 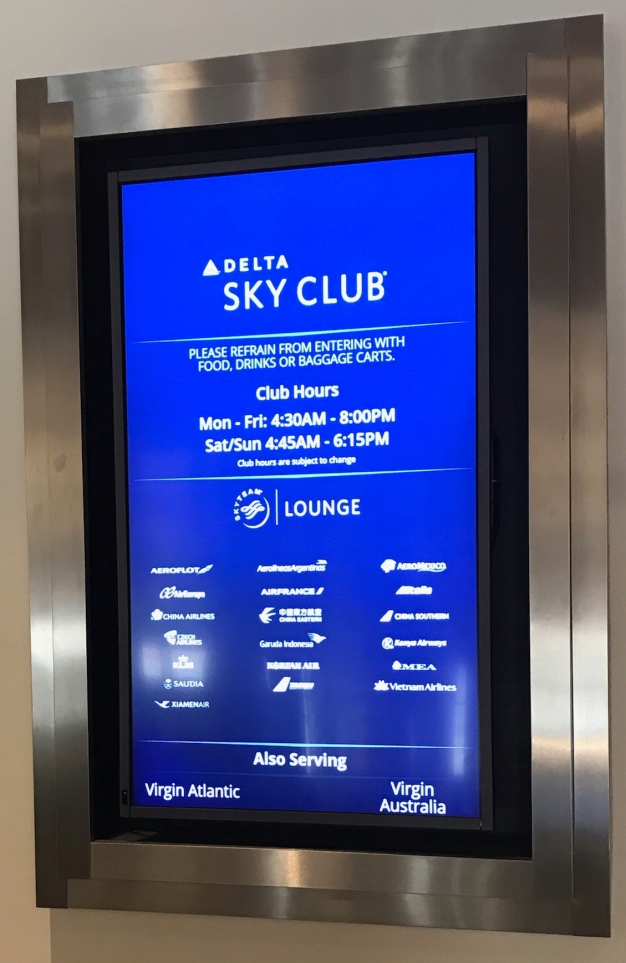 Many flying to or through the east coast in the past few days likely had a travel disruption.  The storms throughout the east coast grounded planes, cancelled flights, and displaced luggage.  The airports in New York were especially disrupted with some passengers and luggage waiting for days to be connected.  Mike and I were among the many whose schedules were affected.  We were scheduled to fly from Raleigh to LaGuardia last Thursday am.  That flight was cancelled, as were the two other flights we were booked on.

Our only option to fly out on Friday was less than desirable.  It was in fact, a terrible routing. We were to fly from Raleigh to Atlanta, then to Louisville, then from Louisville to LaGuardia. What is usually a one hour flight from Raleigh to LaGuardia would now be ten hours in airports and in flight. We decided to take it, thinking if we didn’t, it could be days before we might be booked on another flight given all of the rebookings of flights as a result of all of the cancellations.

Friday came, and we headed to the airport earlier than usual to see if we could find another option for our flight.  While the agent at the check-in counter was sympathetic to our situation, she offered no solution.  So, we checked in and headed to the Delta Sky Club Lounge to wait until it was time to board for our first flight of the day. 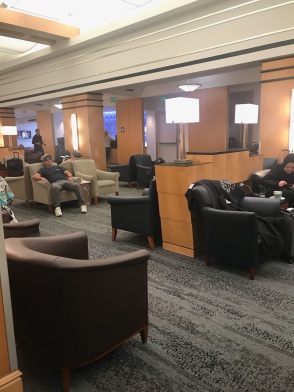 When we checked into the Sky Club Lounge, we met Kathleen, the customer service agent.  When she checked our boarding pass, she was shocked at our routing.  We talked about it with her for a few minutes, but did not ask her to see if there was anything else available.  We did not ask her to, but she did.

When Mike went back to the desk to check on our flight’s boarding schedule, Kathleen had a better option for us.  She had found two first-class seats on a flight from Atlanta to JFK and had booked them for us.  That change would save us half a day of delays.  Our original seats were not in first class, and my ticket, being a companion ticket, was not even eligible for the upgrade.  Nonetheless, Kathleen booked us on that flight in those seats, at no additional cost! 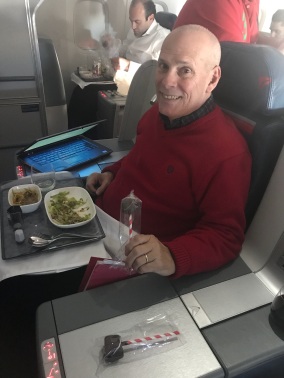 Mike in his first class seat from Atlanta to JFK.

The flight from Atlanta to JFK was one of my most pleasant flying experiences.  The steward took our coats the minute we boarded.  The plane was nicer than any I have been in domestically.  The seats were spacious and fully reclined.  Our seats were bulkhead seats, which usually means there is no storage capacity in front of them.  These seats, however, had a storage area that holds up to ten pounds.

Surprisingly, although the flight was only one and a half hours in duration, a full meal was served.  The food was delicious and healthy.  The bathroom was larger than any other airline bathroom I have seen and it was brightly lit.  (I, who love light, loved this!)  The lime hand soap in the bathroom was a nice touch.  The glasses our drinks were served in were Alessi.  The details on this flight were impressive.  And most important of all, the stewards were all friendly and accommodating.

Once we landed at JFK, the situation was not as pleasant.  We sat on the tarmac for over an hour waiting for a gate.  Once inside the airport, the crowds of people, some of whom had been waiting a couple of days, were packed into the baggage claim area.  It was chaos.  It was more than two hours later before we found our bags and headed out to get a taxi.  While we were in the taxi line a man approached us with an offer of a limousine to take up to eight people to downtown hotels for a fixed price.  The man approached a couple of other couples around us with the same offer.  While I wasn’t sure this was a good idea, Mike and the others decided it was safe, so that is what we did.  That turned out to be a good decision. 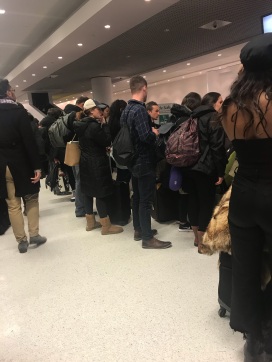 Chaos in baggage claim at JFK

Some of the airport experience at JFK reminded me of the chaos Mike and I was in during our Hurricane Irma experience in St. Maarten in September.  But thankfully, this ended much quicker.  We left the airport and were in our hotel within the hour. 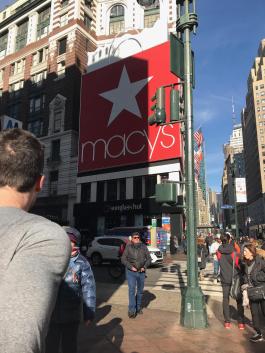 One of many stores in Manhattan! 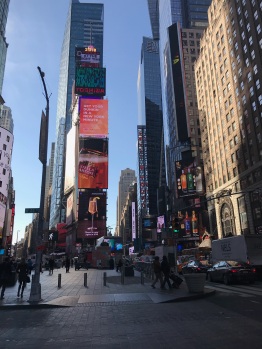 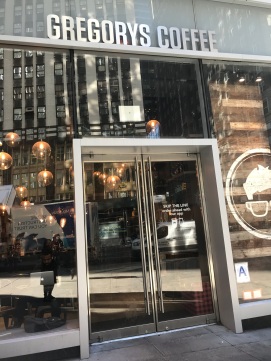 Patti spent more time in this coffee shop than she did in any other shop.” Yes, really!

What is it that makes one person accept whatever is on a computer screen, even if it is problematic for the customer, and another person search for a better solution for that same customer?  What makes one person willing to find a solution and break the rules for the customer’s benefit, even if that customer isn’t in the upper tier of that airline’s customers?  (Although Mike and I both have been premier customers of Delta in years past, neither one of us is at this point.)

Is the difference in the training?  I don’t think so.  Is the difference in position power?  I don’t believe so since both the check-in agent and the Sky Club agent were front-line customer service agents.  Is it age or experience?  Perhaps those were variables, but I hesitate to assume so. If not these differences, what then?  What accounts for one person going more than the extra mile and the other not?

Is the difference as simple as caring; caring with a capital “C”?  Yes, I think so.

Caring is the difference in many things. Things that matter.

And on a different note, today is my Mother’s birthday. She died in September of 1998.  It is hard to believe it has been almost twenty years.   Rest in peace, Mother.

And for those of you who still can, call your Mother!

2 Responses to Delta is Ready When You Are!